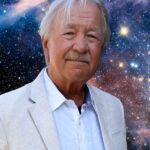 Mr. Hawthorne is the co-author of Astrology for Life: How to Be Your Own Vedic Astrologer. The book is a compendium of The Systems’ Approach to Interpreting Horoscopes, as developed by Professor V.K. Choudhry of Gurugram, India, which is based on the empirical studies of thousands of charts conducted over a 30-year period.

Mr. Hawthorne teaches classes and presents workshops on The Systems’ Approach, and is has been a guest on numerous radio talk shows nationwide. He is known as “The 30-Second Astrologer”, due to his ability to quickly create and read charts live, during radio broadcasts.

Mr. Hawthorne is the President of the International Institute of Predictive Astrology (IIPA), with more than 800 members from more than 40 countries worldwide. He is also a member of both the Council of Vedic Astrology (CVA), and The Systems’ Institute of Hindu Astrology (SIHA). 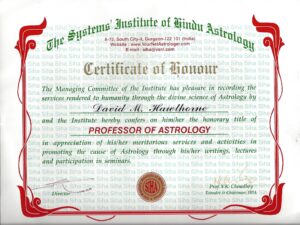 Mr. Hawthorne has been practicing the Transcendental Meditation Program as taught by His Holiness Maharishi Mahesh Yogi, since August 1973. He resides in Fairfield, Iowa, USA — the largest community of (approximately 2,000) meditators in North America — with his wife, Eileen.  They have three adult children, Brian, Sara, and Galen.

Somewhere along the line, I learned a few things about astrology.

I knew my Western Sun sign, for example, and occasionally would read the astrological column in the local newspaper to see what was in the stars for me that month. I even read a few chapters from various books, like Linda Goodman’s Sun Signs, whenever I had a chance while perusing local bookstores.

It wasn’t, however, until I was 33 years old that I actually went to visit an astrologer.

Her name was Sally Husk and she lived with her husband in a fashionable area of Upper Montclair, New Jersey. I knew both Sally and her husband socially and thought it would be interesting to hear what she had to say about my chart. Indeed it was.

I was especially impressed when she discovered the month and year of my divorce. To me, it was fascinating that she could see something so real and personal in my life. It was then that I began thinking about learning astrology for myself.

Thus, I set aside my aspirations and continued with my family and professional life, along with my practice of yoga, and meditation.

Then, around 1986 I heard about Vedic astrology from India called Jyotish, (also known as Hindu astrology), and decided to have my chart read once again. This time, the effect on me was even more profound. Jyotish, (pronounced joy-tish), is translated as “The Divine Science of Light on Time and Karma”. It is said to be more than 5,000 years old and is considered to be the source of all astrology, predating Egyptian, Chinese, and Western astrology.)

Not only was the Jyotishi (astrologer) able to see what was going on in my life, he was able to see past circumstances and predict future events. Most notably, he said to me, “When you were born, did your mother die or did she just leave?”

This was both a shock and a validation, as he had no way of knowing that on the day I was born my mother had given me up for adoption!

I left that meeting in July 1988 resolved to learn Jyotish. To me, it seemed very practical as it dealt with specific topics and the timing of events in life, such as health, childhood, education, marriage, children, parents, career, siblings, finances, and even longevity of life.

Fortunately, by 1988 there were a number of books from India and a few computer software programs available on the market to help me construct charts and learn how to read horoscopes. Now, more than thirty years have passed since I began the study of Vedic astrology.

This study, and the background for my book includes 108 classical and contemporary textbooks on Jyotish, thousands of hours of audio taped presentations by leading astrologers, correspondence courses (both domestic and international), and classes, seminars, and workshops throughout North America.

Most importantly, this educational pursuit led me to discover the co-author of my book, Professor V.K. Choudhry, via the Internet, in Gurgaon, India.

Previously, while studying Jyotish, I had often referred to it as the abyss, a fathomless field of study. And, although I enjoyed the study, it seemed like the more I learned, the less I knew. I felt like a blind man studying the “parts” of an elephant, one part at a time.

Then, through the mentoring of Professor Choudhry and the reading/studying of his books on the “Systems’ Approach to Interpreting Horoscopes”, I began to “own” the whole elephant. In fact, I began to “ride” the elephant, and from this higher perspective, the view was absolutely grand!

By applying the “Systems’ Approach” to astrology, I finally had a simple, accurate, and replicable means with which to read charts. More importantly, my clients began to comment about how the points I made were completely relevant to their past and present circumstances.

This led to another discovery. That is, most people do not want sugar-coated readings. They really want to know what is going on in their lives, whether it is good or bad, so they can have a better opportunity to deal with the situation.

Truth is, most people call on an astrologer when they are experiencing some level of discomfort in their lives, whether with the health, career, marriage, children, family life, relationships, or other areas.

Additionally, even wealthy and educated people have times in their lives when they know that they should look to the stars for guidance in investments, contracts, and coming events, etc..

Until now, Jyotish books were written for practicing astrologers, and they lacked a systematic approach to interpreting horoscopes. Now, with this new curriculum, anyone with a modicum of aspiration can learn in a fairly short period of time how to become a professional astrologer.

Through the books available on this website, and by learning the principles of The Systems’ Approach to Interpreting Horoscopes, anyone can gain the ability to quickly see in any chart what the present planetary influences are, and how long they will last.

What you will learn from these studies is a simple, powerful and contemporary approach to astrology.

For example, you will learn that there are only four elements of astrology: (1) the 9 planets, (2) the 12 houses, (3) the 12 signs of the zodiac, and (4) the planetary time periods that are operating in our lives.

And, you will learn a proper order of sequence in which to apply these principles.  In other words, this is Vedic astrology made easy, replicable and contemporary.

My Jupiterian nature is to learn and teach. That is why I have undertaken this career. It is my way of sharing this “divine” science of the stars with others so they, too, can create and interpret horoscopes for themselves, their families and friends.

I invite you to come and “ride the elephant” with me. I know you will love the (Astro) view!